I’m always pleased to document historic buildings that are going to be stabilized and restored, rather than demolished.  Working in 2009 for BOLA Architecture and Planning, I did the top “before” photograph of two fancy automobile showrooms in Seattle that had been in use since the 1920’s, the Pacific McKay building (left) and Ford McKay building (center to right).  The buildings are on the northwest corner of Mercer St. and Westlake Ave N. in Seattle. When Vulcan Real Estate developed their South Lake Union property, they carefully dismantled the buildings, and stored away many parts of them, including the complete façade made from terracotta.  Vulcan then beautifully reconstructed the showrooms as part of the impressive new Paul Allen Institute, using GLY Construction as lead contractor. The bottom “after” picture was taken in May of 2016. (The photos enlarge if you click on them.) 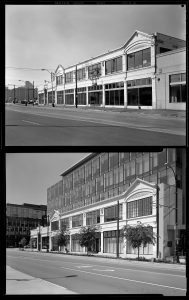 When I did the repeat photo of another view from further back, looking south from across Valley Street, I was amazed at how much the streetscape has changed, in addition to the construction of the Paul Allen Institute. The trolley track has been added, the streets rebuilt, the traffic lights changed, and trees planted. I believe the Ford McKay façade was moved further north to accommodate the widening of Mercer St.  As it turned out, my original vantage point no longer had a good view of the Pacific Ford building, so I moved a few feet west for the repeat photo.  But even with all the changes, the Space Needle is still there in the background on the right. 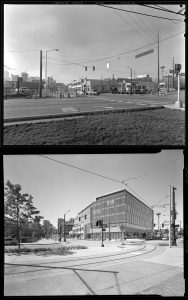